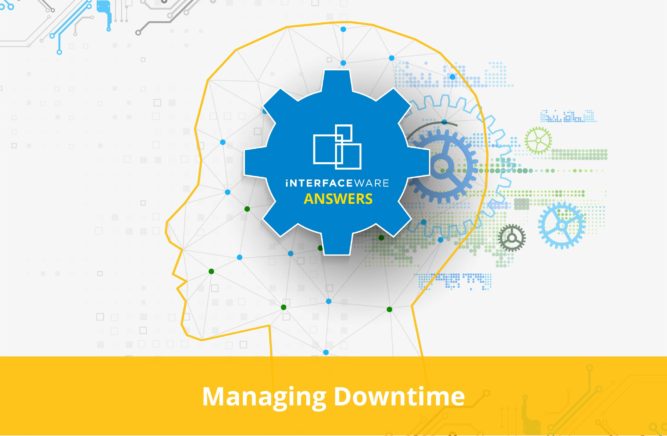 Downtime is defined as a period of time when a computer system, network, or server is shut down or unavailable for use. Downtime can occur for a number of reasons, including system crashes, power failures, system reboots, hardware failures, software updates, connectivity issues, etc.

Downtime can be planned or unplanned. Planned downtime is time specifically set for scheduled hardware/ software upgrades or maintenance. It most commonly involves setting aside a particular time in which IT operations are shut down or restricted in order to perform system changes. Planned downtime is often contrasted with unplanned downtime, which refers to periods when hardware, system, or technical issues restrict operations or cause system shutdowns.

The Effects of Unplanned Downtime

The transfer of data is important to operations especially when handling mission critical data. When unplanned downtime occurs, this data is not able to be transferred, resulting in negative consequences for both internal and external stakeholders. The following are issues that arise for organizations when systems are not up and running:

The Importance of Planned Downtime

FAQ: How do I maximize efficiency during my planned downtime?

The following are some suggestions recommended by our integration experts on how to execute a successful and efficient planned downtime:

Inform all internal and external stakeholders

Be sure to provide plenty of notice to all employees and external users to allow them to prepare in advance and organize their scheduled workflows accordingly.

Scheduled downtime during off hours will have the least impact on business operations because systems will go offline when operations are not dependent on the flow of critical data. It is important to understand your production schedule and be aware of the times when production is at its peak vs when it slows down in order to plan ahead.

Pro Tip: If operations run 24/7, it is best to perform system downtime at the slowest hours of the day.

Develop a process for activities taking place during downtime

It is important to be well prepared and to consider all that can go wrong during the planned downtime so that you can have contingency plans in place for any issues that may arise.

Pro Tip: Be aware of any external processes that may affect the procedures taking place during downtime. For example, it should be kept in mind that backup software or antivirus programs tend to interfere with an integration engine’s reboot process.

Production environments are live, which affects patients and other stakeholders that rely on the data flow. If there is an interruption because of an error with the changes, the people who rely on this data will be negatively affected. This is why it is important to perform all changes in the test environment, ensuring that everything runs smoothly, before making the change live in production.

Pro Tip: Robust regression tests should be performed to ensure the outputs of the old and newly upgraded systems match.

It’s All About Planning Ahead

With enough planning and organization, our experts are confident that you can greatly minimize inefficiencies during planned downtime.

Being organized and having a clear downtime process will ensure your operations continue to run smoothly and efficiently without negative consequences for the stakeholders involved.

If you are interested in learning more about managing downtime or how you can keep planned downtimes to a minimum, leave a comment below or contact us.